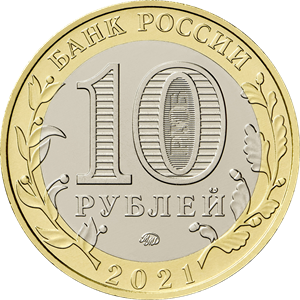 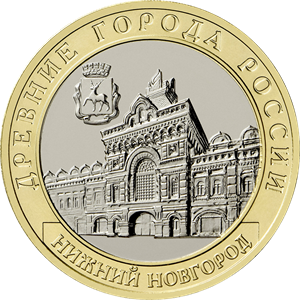 in the centre of the disc there is the denomination of the coin ‘10 РУБЛЕЙ’ (10 RUBLES), inside the figure ‘0’ there are hidden images of the number ‘10’ and the inscription ‘РУБ’ (RUB) visible by turns when the angle of vision changes, below is a mint trade mark; on the ring above there is an inscription ‘БАНК РОССИИ’ (BANK OF RUSSIA), below is the year of issue ‘2021’, on the left and on the right there are stylised images of plant branches going over to the disc.

a relief image of the building of the Nizhny Novgorod trade fair; the emblem of Nizhny Novgorod at the top on the left; and the inscriptions on the outer ring along the rim: ‘ДРЕВНИЕ ГОРОДА РОССИИ’ (ANCIENT TOWNS OF RUSSIA) at the top and ‘НИЖНИЙ НОВГОРОД’ (NIZHNY NOVGOROD) at the bottom.