The 800th Anniversary of the Foundation of Nizhny Novgorod 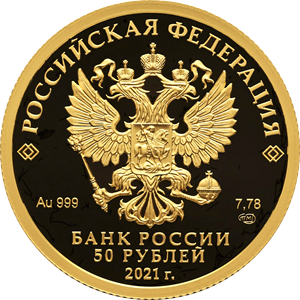 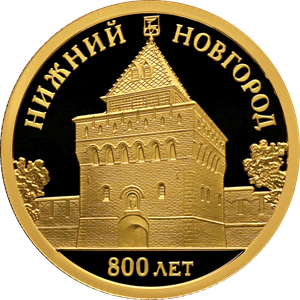 the mirror field of the disc bears a relief image of the National Coat of Arms of the Russian Federation, over it along the rim there is the semicircular inscription ‘РОССИЙСКАЯ ФЕДЕРАЦИЯ’ (RUSSIAN FEDERATION) framed on both sides by doubled rhombuses, below under the coat of arms there are indications of the precious metal and its fineness on the left and the fine metal content and the mint trade mark on the right, at the bottom in the centre, in three lines, there is an inscription ‘БАНК РОССИИ’ (BANK OF RUSSIA), the denomination of the coin ‘50 РУБЛЕЙ’ (50 RUBLES), and the year of issue ‘2021 г.’ (2021).

the mirror field of the disc features a relief image of the Dmitrievskaya Tower of the Nizhny Novgorod Kremlin; there are inscriptions: ‘НИЖНИЙ НОВГОРОД’ (NIZHNY NOVGOROD) along the upper rim and ‘800 ЛЕТ’ (800 YEARS) at the bottom.