The 100th Anniversary of the Foundation of the Kabardino-Balkar Republic 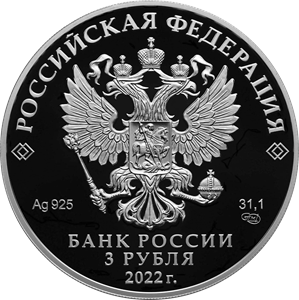 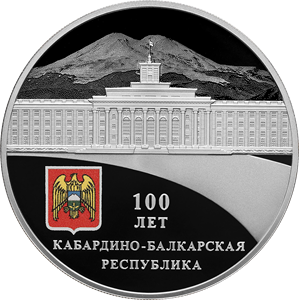 the mirror field of the disc bears a relief image of the building of the Government of the Kabardino-Balkar Republic against the background of an image of Elbrus; on the left, there is a colour image of the coat of arms of the Republic; at the bottom there are inscriptions in four lines: ‘100 ЛЕТ’ (100 YEARS) and ‘КАБАРДИНО-БАЛКАРСКАЯ РЕСПУБЛИКА’ (KABARDINO-BALKAR REPUBLIC).

In 1921, Kabardia and Balkaria, along with other historic regions of the Central Caucasus, joined the Mountain ASSR. On 1 September 1921, Kabardin Okrug seceded from the Mountain ASSR and on 16 January 1922, Balkaria followed its suit. The Kabardino-Balkarian Autonomous Region was established in 1922, and it was transformed into the ASSR in 1936. Since 1992, it has been known as the Kabardino-Balkarian Republic.

It is located in the central part of the Greater Caucasus range, with Nalchik being its capital and a major economic hub of the North Caucasus.

The basis of the republic’s economy is agriculture (grain crops: wheat, corn, and millet), cattle breeding (dairy and meat production), and logging. In the 1950s–1960s, Kabardino-Balkaria constructed large mechanical and instrumentation engineering enterprises.

The republic boasts unrivalled tourist and recreational resources. Prielbrusye National Park with its vast infrastructure is the undisputed leader by the number of tourist visits. The main tourist zones in Cherek Gorge are the Aushiger spa resort, famous for its thermal springs; the Blue Lakes complex consisting of five lakes; the Kabardino-Balkaria highland biosphere state reserve, being Europe’s only highland nature reserve possessing unique flora and fauna; and archaeological and tourist complex Upper Balkaria hosting a number of sights: the ruins of traditional Balkarian settlements, defensive towers, mounds, etc. Chegem district is famous for its historical monuments. Nalchik with its health and resort organisations is a federal resort.

Representatives of more than 100 nationalities live in the republic, making it one of the most multinational constituent territories in the Russian Federation.