The 100th Anniversary of the Foundation of the Komi Republic 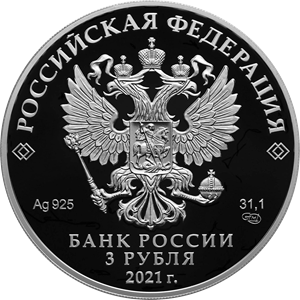 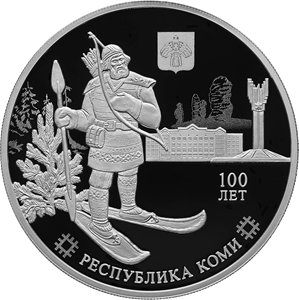 the mirror field of the disc features a relief image of the prose epics warrior Pera standing near a young pine tree on the left, relief images of the building of the Pitirim Sorokin Syktyvkar State University and the labour glory monument of the Komi Autonomous Soviet Socialist Republic, and an image of the Manpupuner rock formations demolished by wind, on the right, the emblem of the Komi Republic at the top, and inscriptions: ‘100 ЛЕТ’ (100 YEARS) in two lines on the right, and ‘РЕСПУБЛИКА КОМИ’ (KOMI REPUBLIC) at the bottom along the rim framed by elements of the national ornament.

In the Middle Ages, the Komi were chronicled as the people of Perm, and the territory of their homeland was Perm Vychegodskaya (the modern Komi Republic) and Perm Velikaya (the Perm Territory).

Starting from the 16th century, the boundaries of the Komi settlement were changed. The ethnic boundaries of the Komi in the east were formed in the 18th century, and those in the north – in the 19th century. Nowadays, the Komi live in the Komi Republic, the Perm Territory, the Kirov Region, the Nenets Autonomous Area of the Arkhangelsk Region, on the Kola Peninsula, in the Bolshezemelskaya Tundra, and in Western Siberia.

The main attractions of the Komi Republic are natural. There are 240 specially protected natural areas in the republic. Two of them are the Yugyd Va National Park and the Pechora-Ilych Nature Biosphere Reserve of federal significance. Under the general name Virgin Komi Forests, they became the first natural site in Russia recognised by UNESCO as a World Heritage Site. The Pechora-Ilyich Natural Biosphere Reserve is also famous for the weathering rock formations on the Manpupuner Plateau, one of the Seven Wonders of Russia.