The 300th Anniversary of the Foundation of Kuzbass 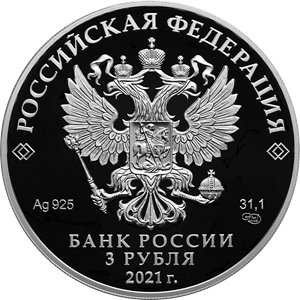 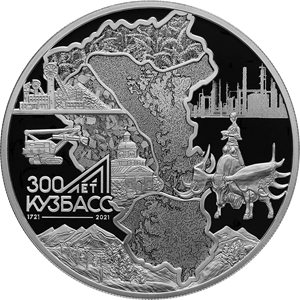 the mirror field of the disc bears relief images of the contour of the Kemerovo Region – Kuzbass, a symbol commemorating the 300th anniversary of Kuzbass, the monument ‘Zolotaya Shoriya’, Sheregesh ski resort, the Barnaul gates of the Kuznetsk fortress, as well as images depicting the industrial power of the region.

Back in 1698, after learning about silver ore deposits found near the Kitat River, Peter I ordered the Tomsk governor ‘to render all possible and diligent assistance for the development of ore exploration and production in the area of the tributaries of the Kiya River.’ This was how the silver ore of Salair, the iron ore of Gornaya Shoriya, and the gold of Kuznetsk Alatau were discovered.

The 18th century was the starting point for the industrial development of the Kuznetsk land. In 1721, Mikhailo Volkov, a Cossack descendent, found a ‘burnt mountain’ on the bank of the Tom River, becoming the discoverer of Kuznetsk coal. Akinfiy Demidov, a manufacturer from the Urals, was the first to show interest in the development of Kuznetsk coal.

After the October 1917 Revolution, Kuzbass became part of the West Siberian Territory and then, the Novosibirsk Region. During the Great Patriotic War, Kuzbass was the main supplier of coal and metal.

In 1943, for the purpose of increasing the production of coal, metals and military products needed for the front by Kuzbass enterprises, the Presidium of the Supreme Soviet of the USSR issued a decree on 26 January with a decision to detach Kuzbass from the Novosibirsk Region and to create the Kemerovo Region in its territory. The city of Kemerovo became the regional centre.

Today, Kuzbass is the most developed and densely populated region of Western Siberia. The three corner stones of this region’s economy are the coal mining, metallurgical and chemical industries. Downhill ski tourism is a new developing industry of Kuzbass.