The Bicentennial Anniversary of the Birthday of N.V. Gogol 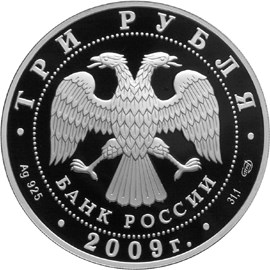 in the centre - the emblem of the Bank of Russia [the two-headed eagle with wings down, under it - the semicircular inscription "БАНК РОССИИ" (BANK OF RUSSIA)] framed by a circle of dots and inscriptions along the rim - on top: "ТРИ РУБЛЯ" (THREE RUBLES), below: to the left - indications of the precious metal and its fineness, in the centre - the year of issue "2009 г." (2009), to the right - the fine metal content and the mint trade mark.

on smooth field to the left - the portrait of N.V. Gogol (by A.A. Ivanov, 1841), to the right above - the facsimile inscription of the writer: "Н. ГОГОЛЬ" (N.GOGOL) going over to a stylized image of a whip raised by the coachman over headlong running troika (three horses harnessed abreast), below on the matted surface in the form of the half-noon - dates: "1809-1852".

Nikolay Vasilyevich Gogol (1909-1952) - outstanding Russian writer. He enriched the literature language by drawing it considerably near to the spoken one.