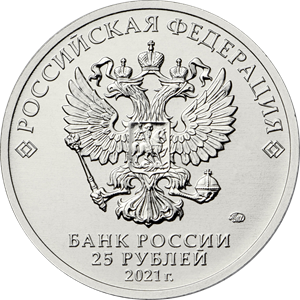 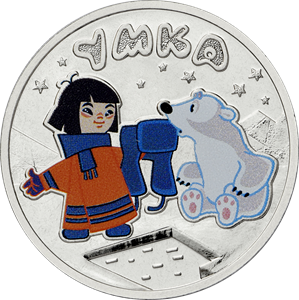 in the centre there is a relief image of the National Coat of Arms of the Russian Federation and over it a semicircular inscription along the rim ‘РОССИЙСКАЯ ФЕДЕРАЦИЯ’ (RUSSIAN FEDERATION) framed by doubled rhombuses on both sides, under the emblem, in three lines, there is an inscription ‘БАНК РОССИИ’ (BANK OF RUSSIA), the coin’s par value ‘25 РУБЛЕЙ’ (25 RUBLES), and the year of issue ‘2021 г.’ (2021), and on the right there is a mint trade mark.

a coloured image of the characters of the ‘Umka’ animation film against the background of ice and the sky full of stars; at the top, there is an inscription ‘УМКА’ (UMKA).

‘Umka’ is a Soviet cartoon filmed by directors Vladimir Pekar and Vladimir Popov at the Soyuzmultfilm studios in 1969. The story about a little polar bear created by Yury Yakovlev was popular among many generations of spectators.