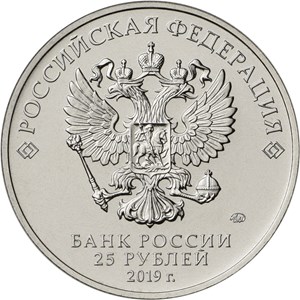 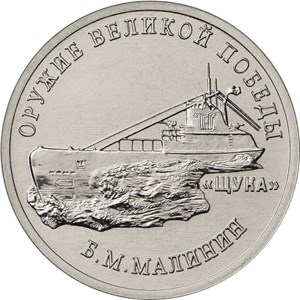 in the centre there is a relief image of the National Coat of Arms of the Russian Federation and over it a semicircular inscription along the rim: "РОССИЙСКАЯ ФЕДЕРАЦИЯ" (RUSSIAN FEDERATION) framed by doubled rhombuses on both sides, under the emblem, in three lines, there is an inscription: "БАНК РОССИИ" (BANK OF RUSSIA), the coin’s par value "25 РУБЛЕЙ" (25 RUBLES), and the year of issue "2019 г." (2019), and on the right there is a mint trade mark.

a relief image of the Shchuka-class submarine and the inscription ‘ЩУКА’ (SHCHUKA) on the right; along the rim there are the inscriptions ‘ОРУЖИЕ ВЕЛИКОЙ ПОБЕДЫ’ (WEAPONS OF THE GREAT VICTORY) at the top and ‘Б.М. МАЛИНИН’ (BORIS MALININ) at the bottom.

Boris Mikhailovich Malinin (1889-1949) was a Soviet shipbuilding scientist who designed the Shchuka-class submarines produced in 1930-1945.

Shchuka-class submarines were remarkable for their relatively cheap production, simple maintenance, manoeuvrability and robustness. These submarines were extensively used in combat in the Great Patriotic War and sank many enemy ships. Some submarines of this class became guard submarines for their battle merits.