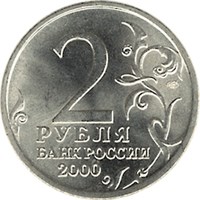 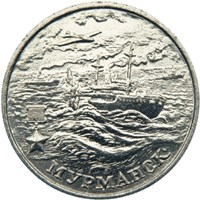 two transport vessels of the naval escort, close to them - a fountain of an explosion, above them - an aircraft, to the left - the Gold Star Medal, to the right - a warship, at the bottom - the inscription along the rim: "МУРМАНСК" (MURMANSK).

The highest distinction class "Hero City" accompanied by the awarding with the Lenin Order and the Gold Star Medal has been conferred on the city of Murmansk in 1985 for the mass heroism and courage of its defenders displayed in the struggle for freedom and independence of the Motherland during the Great Patriotic War.