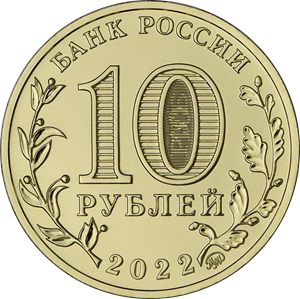 a relief image of a fragment of the Rear-front Memorial; along the rim there are inscriptions: ‘МАГНИТОГОРСК’ (MAGNITOGORSK) at the top and ‘ГОРОДА ТРУДОВОЙ ДОБЛЕСТИ’ (CITIES OF LABOUR VALOUR) on the ribbon at the bottom.

The city of Magnitogorsk was awarded the honorary title of the Russian Federation City of Labour Glory for the significant contribution of its residents to the Victory in the 1941–1945 Great Patriotic War, for ensuring the uninterrupted production of military and civilian equipment by industrial enterprises, and large-scale labour heroism and dedication displayed during the War.

During the Great Patriotic War, the city produced armour and shell steel which was the most critical material for the defence industry. About 100 types of defence products were created at the Magnitogorsk Iron and Steel Works. Every second tank and every third projectile used against Nazi invaders were made of Magnitigorsk metals.