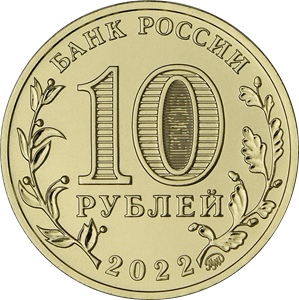 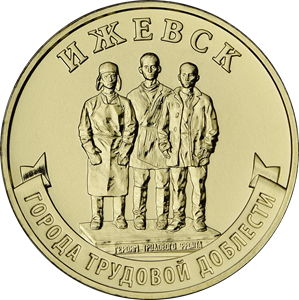 a relief image of a fragment of the monument To the Gunsmiths of Udmurtia, Heroes of the Labour Front of the Great Patriotic War of 1941–1945; along the rim there are inscriptions: ‘ИЖЕВСК’ (IZHEVSK) at the top and ‘ГОРОДА ТРУДОВОЙ ДОБЛЕСТИ’ (CITIES OF LABOUR VALOUR) on the ribbon at the bottom.

The city of Izhevsk was awarded the honorary title of the Russian Federation City of Labour Glory for the significant contribution of its residents to the Victory in the 1941–1945 Great Patriotic War, for ensuring the uninterrupted production of military and civilian equipment by industrial enterprises, and large-scale labour heroism and dedication displayed during the War.

Industrial enterprises of Izhevsk supplied the Red Army with arms and munitions. Over the war years, Izhevsk enterprises provided the front with more than 12 million small arms. The Izhevsk Machine-Building Plant organised the production of Degtyarev anti-tank rifles, Simonov anti-tank rifles, Tula Tokarev pistols, Nagant revolvers, lighting pistols, and other types of small arms. Izhevsk is the only city in the USSR that produced all types of small arms. Izhevsk workers upgraded the legendary Maxim machine gun widely used during the Russian Civil War. Ninety percent of all front-line Maxims were produced in Izhevsk. The metallurgical plant fulfilled orders for the casting of various grades of steel and produced parts and components for military equipment. Its products were delivered to 150 Soviet enterprises. The Izhevsk metals were used to forge nose cones for Katyusha rockets and crankshafts for aircraft, manufacture springs for machine guns and anti-tank rifles, bodies of naval mines, cast machine gun shields and barrels of artillery guns.

In Izhevsk, many city residents voluntarily got jobs at factories from the first days of the war. The ranks of workers were replenished mainly with young people. In 1943, every seventh worker employed by these enterprises was under 18. About 2,000 home front workers received prestigious awards of the Soviet Union.

In December 1941, when the Battle of Moscow was underway, the USSR State Defence Committee took a decision to start the construction of the legendary Izhevsk-Balezino railway to create the shortest connection between the Perm and Kazan trunk railways and improve the supply of military equipment and food to the front.