End of the Second World War 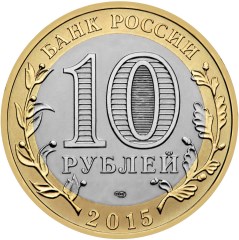 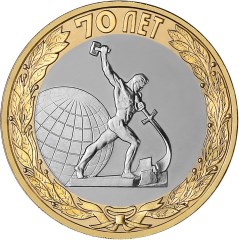 in the center of the disc – indication of the denomination of the coin: "10 РУБЛЕЙ" (10 RUBLES), inside of the figure "0" – hidden pictures of the number "10" and of the inscription "РУБ" visible by turns on changing angle of vision, in the lower part of the disc – the mint trade mark, on the ring along the rim above – the inscription: "БАНК РОССИИ" (BANK OF RUSSIA), below – the year of issue "2015", to the left and to the right – stylized twigs of plants going over to the disc.

on the disc – the image of the monument sculpture by E.V. Vuchetich "Let’s Beat swords into Ploughshares", to the left – contours of the globe, on the ring along the rim – the laurel wreath with the inscription above: "70 ЛЕТ" (70 YEARS).