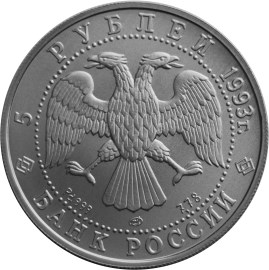 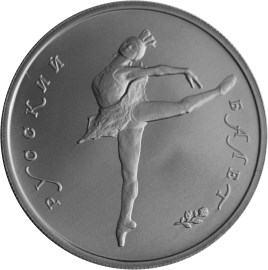 in the center — the Emblem of the Bank of Russia (the two headed eagle designed by I.Bilibin), the letters under it indicate the metal sign, the fineness, the mint trademark and the fine metal content. The inscriptions along the rim framed by a circle of dots: at the top — «5 РУБЛЕЙ 1993 г.» (5 RUBLES 1993), at the bottom — "БАНК РОССИИ" (BANK OF RUSSIA).

in the center - a dancing ballerina, the inscription from the left to the right along the rim: "РУССКИЙ БАЛЕТ" (RUSSIAN BALLET).

The artist and the sculptor: A.V. Baklanov
Leningrad Mint (ЛМД)
The edge: 278 corrugations

Russian ballet - a universally accepted cultural term denoting the indisputable authority of Russian choreographers, composers and ballet dancers. Russian ballet appeared in the latter half of the XVIIth century and by the beginning of the XXth century it had taken the leading position in choreography. Russian ballet first won international acclaim thanks to the Ballets Russes seasons, organised in Paris and London in 1907-1914 by Sergei Diaghilev, and the legendary Anna Pavlova. Later on Russian ballet stars such as Galina Ulanova, Maya Plisetskaya, Yekaterina Maximova and Vladimir Vasilyev contributed to its glory. The series includes 20 coins made of precious metals. Coins of the same denomination, of proof and uncirculated quality, have the same design.