Peter the Great – 350th Anniversary of his Birth 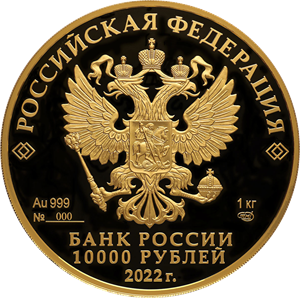 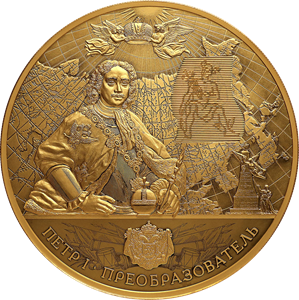 a relief image of the National Coat of Arms of the Russian Federation, over it along the rim there is the semicircular inscription ‘РОССИЙСКАЯ ФЕДЕРАЦИЯ’ (RUSSIAN FEDERATION) framed on both sides by doubled rhombuses, below under the coat of arms there are indications of the precious metal, its fineness, and the serial number of the coin on the left and the fine metal content and the mint trade mark on the right, at the bottom in the centre, in three lines, there is an inscription ‘БАНК РОССИИ’ (BANK OF RUSSIA), the denomination of the coin ‘10000 РУБЛЕЙ’ (10000 RUBLES), and the year of issue ‘2022 г.’ (2022).

relief images of the portrait of Peter the Great with imperial regalia and angels supporting the crown shown against the background of the map of the Russian Empire and the stela with the allegories of the Empire; on the right, there is a raster image representing the allegories of successful trade and creation, visible by turns when the angle of vision changes; in the lower part, there is a relief image of the double-headed eagle overlaid on the ermine mantle, against the background of the composition of military symbols; at the bottom, along the rim, there is a relief inscription: ‘ПЕТР I • ПРЕОБРАЗОВАТЕЛЬ’ (PETER I • THE REFORMER).

Peter I (1672–1725) is the last tsar of All Russia and the first Russian Emperor who radically changed the international, political, economic, social, and cultural image of Russia for the 29 years of his autocratic rule.

Peter I is remembered in Russian and world history as a talented military leader and naval commander. Peter I created the Russian navy and the regular army. At the age of 24, he went to war against the Ottoman Empire and took the city of Azov: for the first time, Russia got access to the southern seas. The Great Northern War against Sweden’s King Charles XII, which began in 1700, ended up in 1721, with Russia getting access to the Baltic Sea where Russia captured a strip of coastline from Vyborg to Riga. In the next three years, during the Persian campaign, the Russian Empire consolidated on the western coast of the Caspian Sea and gained control of Iranian provinces with the cities of Derbent, Baku, and Rasht. As a result, Russia became a great power. Not a single military campaign or diplomatic forum could be started in Europe without Russia since then. On 27 May 1703, on the lands conquered from the Swedes, Peter I founded Saint Petersburg (Russian: Sankt Pieterburkh) which became the capital of Russia in 1712.

Peter I began to build iron works throughout the country that made Russia the third largest ferrous metals producer in Europe. Peter I undertook a regional reform in Russia: he divided the whole country into governorates (Russian: guberniyas), provinces and districts, i.e., he created a vertical power structure to rule the country: tsar – governors (Russian: gubernators) – heads of provinces (Russian: voivodes) – heads of districts (Russian: zemsky commissar). He replaced the Boyar Duma with the Governing Senate which drafted new laws and monitored finance and justice in the country. Peter I made a great contribution to compulsory and vocational education in Russia, urged Russians to educate themselves and demonstrated that education was the key to their future career. He founded the Academy of Sciences and opened the first museum in Russia. After his travels to Europe, he set a course for European values, traditions and etiquette.