The 155th Anniversary of the Bank of Russia 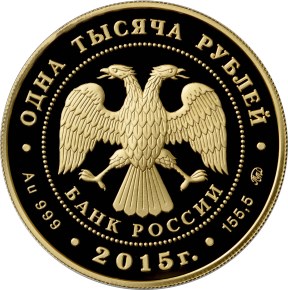 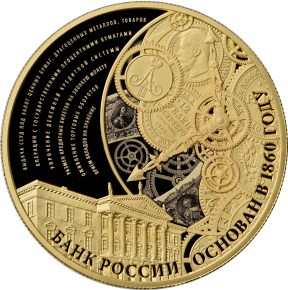 in the centre – the emblem of the Bank of Russia [the two-headed eagle with wings down, under it – the semicircular inscription "БАНК РОССИИ" (BANK OF RUSSIA)] framed by a circle of dots and inscriptions along the rim – on top: "ОДНА ТЫСЯЧА РУБЛЕЙ" (ONE THOUSAND RUBLES), below: to the left – indications of the precious metal and its fineness, in the centre – the year of issue "2015 г." (2015), to the right – the fine metal content and the mint trade mark.

in the lower part of the disc – the relief image of the facade of the building in Saint Petersburg where the State Bank of Russian Empire was situated in the second half of XIX – in the beginning of XX century, over it to the right – the allegoric image of a clockwork, some gears of which performed in appearance of coins, to the left on the mirror section of the field – six semicircular lines of microtext, along the rim – inscriptions, below: "БАНК РОССИИ" (BANK OF RUSSIA), to the right: "ОСНОВАН В 1860 ГОДУ" (FOUNDED IN 1860).