The 150th Anniversary of the Birthday of A.P. Chekhov 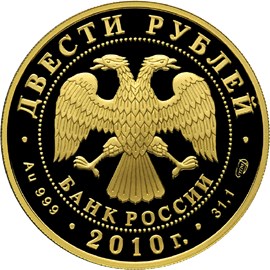 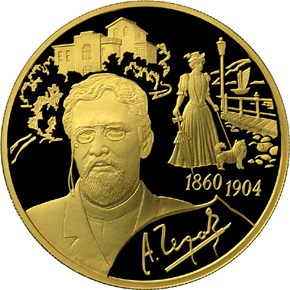 in the centre - the emblem of the Bank of Russia [the two-headed eagle with wings down, under it - the semicircular inscription "БАНК РОССИИ" (BANK OF RUSSIA)] framed by a circle of dots and inscriptions along the rim - on top: "ДВЕСТИ РУБЛЕЙ" (TWO HUNDRED RUBLES), below: to the left - indications of the precious metal and its fineness, in the centre - the year of issue "2010 г." (2010), to the right - the fine metal content and the mint trade mark.

to the left - the portrait of A.P. Chekhov, above - the image of his memorial house with garden in Yalta, to the right - the figure of a woman with a little dog on the quay, lower - dates in two lines: "1860" and "1904", below on the mirror surface of a paper sheet - the matted facsimile signature of the writer: "А. ЧЕХОВ" (A.CHEKHOV).

Anton Pavlovich Chekhov (1860-1904) - great Russian writer, Honored Academician of the Petersburg Academy of Sciences. He wrote narratives and stories which brought him the fame of one of the greatest short story writers in the history of world literature. His plays "Seagull", "Uncle Vanya", "Three Sisters", "Cherry Orchard" are staged in the theatres around the world more than one century.