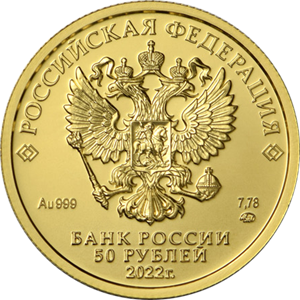 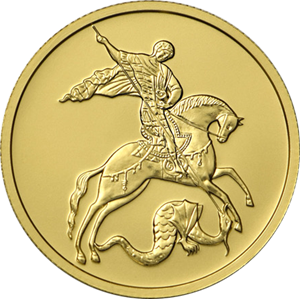 in the centre the relief image of the National Coat of Arms of the Russian Federation, over it along the rim the semicircular inscription ‘РОССИЙСКАЯ ФЕДЕРАЦИЯ’ (RUSSIAN FEDERATION), framed on both sides by doubled rhombuses, below under the coat of arms to the left indications of the precious metal and its fineness, to the right the fine metal content and the mint trade mark, at the bottom in the centre, in three lines, the inscription ‘БАНК РОССИИ’ (BANK OF RUSSIA), the denomination of the coin ‘50 РУБЛЕЙ’ (50 RUBLES), the year of issue ‘2022 г.’ (2022).

a relief image of Saint George the Victorious on horseback killing a dragon with a spear.

Starting from the 13th century, the image of Saint George the Victorious was used in Russia and its neighbouring states as an element of the state symbols on princely seals, standards, coats of arms, and coins. The image was featured on the coat of arms of the Russian Empire, and is displayed on the national emblem of the Russian Federation now.