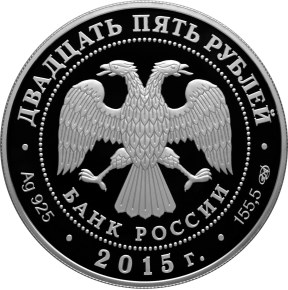 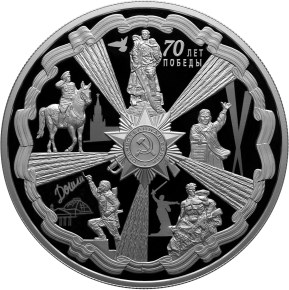 in the centre – the relief image of the Order of the Patriotic War with five radial diverging beams, in sectors made by them: above – the Monument to the Soldier the Liberator in the Treptower Park in Berlin, the inscription: "70 ЛЕТ ПОБЕДЫ" (70 YEARS OF THE VICTORY) and a flying dove, to the right – a fragment of the poster "The Appealing Motherland", to the right below – monuments "To the Fighters to the Biter End" and "The Appealing Motherland" on the Mamay Mound in Volgograd, to the left below – the figure of a Soviet solder drawing an inscription on the wall of Reichstag, to the left – Marshal Zhukov on horseback taking the parade on the Red Square, along the rim – the circle of the ribbon of the Saint George Order.