1100th Anniversary of the Christianisation of Alania 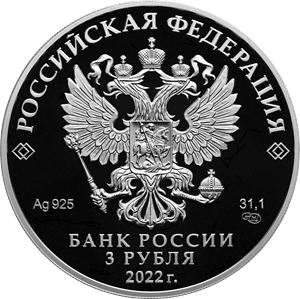 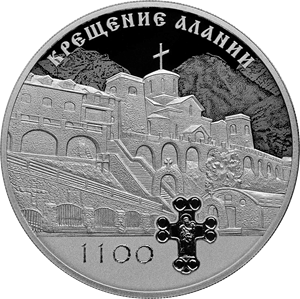 a relief image of the Fiagdon Monastery in North Ossetia-Alania against the background of a mountain landscape laser treated for matte finishing. There is a relief inscription at the top around the circumference: ‘КРЕЩЕНИЕ АЛАНИИ’ (CHRISTIANISATION OF ALANIA). An image of the traditional Alanian cross and the numeral ‘1100’, both in polished relief, are below in the matted field.

In the 1st century A.D., a new northern Iranian ethnic group – the Alans entered the historical arena on a fairly vast territory from the Aral Sea to the Danube. In the early 10th century, Christianity widely penetrated Alania. Orthodoxy became the official religion in Alania, mass conversion of the population to Christianity began, and the Alanian diocese of the Patriarchate of Constantinople was established. In the 10th and 11th centuries, monumental domed churches were built.

Baptism led to cultural and socio-economic booming development, the spread of alphabetic writing, and the growth of political influence of the Alanian state. Eventually, this civilisation choice contributed to the entry of Alania-Ossetia into the Russian Empire and the rapid integration of the Ossetian society into the cultural and political space of Russia.