300th Anniversary of the Foundation of Nizhny Tagil 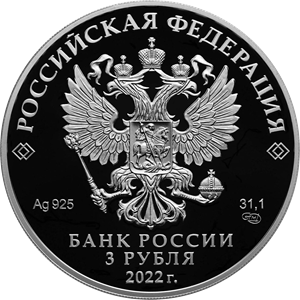 a relief image of the National Coat of Arms of the Russian Federation and a semicircular inscription above it along the rim: ‘РОССИЙСКАЯ ФЕДЕРАЦИЯ’ (RUSSIAN FEDERATION) framed with paired diamonds on both sides, under the coat of arms there are the chemical symbol of the metal and fineness on the left and fine metal content and the mint trade mark on the right, at the bottom in the centre, in three lines, there is an inscription: ‘БАНК РОССИИ’ (BANK OF RUSSIA), the coin denomination: ‘3 РУБЛЯ’ (3 RUBLES), and the year of issue: ‘2022 г.’ (2022)

a relief image of the building of the Nizhny Tagil Museum Preserve ‘Gornozavodskoi Ural’ (Mining and Metallurgical Ural), and images of the former iron and steel plant, which is currently a museum of the history of the development of ferrous metallurgy equipment and machinery, and the watchtower atop of Lisya Mountain, laser treated for matte finishing; below, against a matted background, there are relief inscriptions: around the circumference – ‘НИЖНИЙ ТАГИЛ’ (NIZHNY TAGIL), and above it in two lines – ‘300 ЛЕТ’ (300 YEARS).

Nizhny Tagil is the second largest city in the Sverdlovsk Region, a major industrial and cultural centre of the Middle Urals, founded in 1722 by Tula merchants and industrialists Nikita Demidov and Akinfiy Demidov.
Thanks to the construction of Nizhny Tagil iron works in the 18th century, Russia first entered the world market as an industrial power with high-quality metal. In the second half of the 18th century, about two-thirds of the Demidovs’ iron was exported. Tagil sheet copper, metal with the trademark ‘Old Sable’, malachite, gold and platinum served as a basis for the industrial development and prosperity of Russia.
For almost three hundred years of history, the city has developed highly energy-intensive industries, such as ferrous metallurgy and metalworking, chemistry, the light and food industries. The key industries account for 95.4% in the overall output of local products. The city was and remains Russia’s steel stronghold and defensive shield. This is the largest industrial centre created owing to the power of the Demidovs’ old iron works and modern giant enterprises.