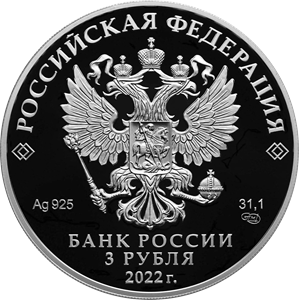 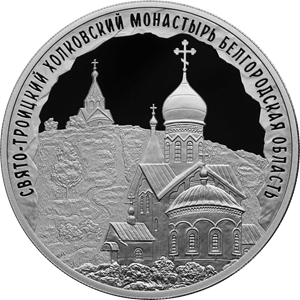 a relief image of the Kholki Monastery and the inscription: ‘СВЯТО-ТРОИЦКИЙ ХОЛКОВСКИЙ МОНАСТЫРЬ БЕЛГОРОДСКАЯ ОБЛАСТЬ’ (THE HOLY TRINITY KHOLKI MONASTERY, BELGOROD REGION) along the rim against a stylised relief background, the pattern of which is reminiscent of the chalk walls of the Kholki caves.

The Holy Trinity Kholki Monastery is an active Orthodox male monastery. This is a unique cave monastery in the Belgorod Region, located on the banks of the Oskol River near the village of Kholki in the Chernyansky District, fifteen kilometres from the city of Novy Oskol.

It was first mentioned in chronicles back in 1620. The monastery was founded by monk Gelasius. Its brethren lived and prayed in chalk caves dug out in one of the hills near the village of Chernyanka.

The monastery existed for 144 years, and in 1764 it was abolished by the order of Empress Catherine II. The entrance to the caves was blocked, acts of worship in the underground temple were cancelled. The monastery’s Transfiguration Church built in the 1650s became a parish.

In the mid-1970s, local historians showed interest in the caves. Senior executives of the Chernyansky District decided to restore the caves. The partly restored Kholki caves were opened to visitors in the early 1990s. In 1995, the clergy of the Chernyansky District resumed Sunday divine services in the underground Holy Trinity Church. Kholki became not only a tourist place, but also a site of pilgrimage.

In 1996, in the territory of the ancient Kholki monastery, Bishop (now Archbishop) of Belgorod and Stary Oskol Ioann consecrated three foundation stones at the construction site of two churches and a chapel. At first, a gate church in the name of Saint Anthony and Theodosius of Kiev-Pechersk was built at the entrance of the cave, followed by the Vladimir chapel. In December 1999, Archbishop of Belgorod and Stary Oskol Ioann consecrated the monastery church in honour of the Don Icon of Our Lady. The opening of the Holy Trinity Kholki Monastery was blessed at a session of the Holy Synod of the Russian Orthodox Church on 28 December 1999.