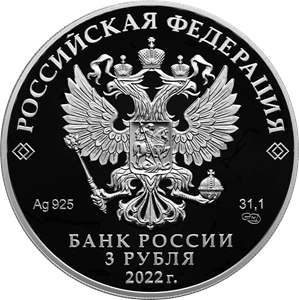 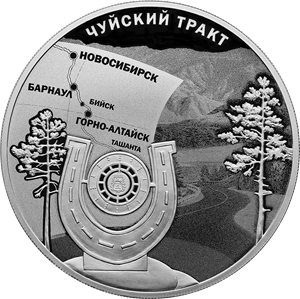 a relief image of the National Coat of Arms of the Russian Federation, over it along the rim there is the semicircular inscription ‘РОССИЙСКАЯ ФЕДЕРАЦИЯ’ (RUSSIAN FEDERATION) framed on both sides by doubled rhombuses, below under the coat of arms there are indications of the precious metal and its fineness on the left and the fine metal content and the mint trade mark on the right, at the bottom in the centre, in three lines, there is an inscription ‘БАНК РОССИИ’ (BANK OF RUSSIA), the denomination of the coin ‘3 РУБЛЯ’ (3 RUBLES), and the year of issue ‘2022 г.’ (2022).

The Chuysky Trakt (or Chuya Highway) is one of the oldest trade roads in the world that connects Siberia with Central Asia. For a long time, before the modern Chuysky Trakt, the road was called the Mungalsky Trakt mentioned far back in thousand-year-old Chinese chronicles. Where the paved road runs now, there was an old pathway used by merchants and warriors since ancient times.

The historical Chuysky Trakt is part of the modern highway from Biysk to the border with Mongolia; its length is about 630 km. As part of Russia, this road began to be used in the 18th century. A highway suitable for vehicle traffic was built only by the mid-1930s. Since 2007, the highway has been completely paved.

Today, the Chuysky Trakt is one of the most popular routes for car, motorcycle and bicycle tourism.

This is one of the few roads of the world that has its own museum. The Chuysky Trakt museum is located in the city of Biysk on the first floor of the nature department of the Biysk Local Lore Museum.