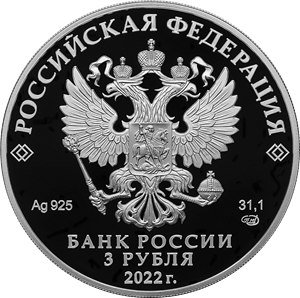 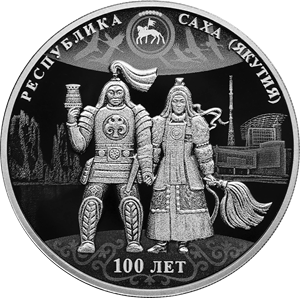 the mirror field of the disc features the mythological characters of the Yakut national epic Olonkho – Nyurgun Bootur and Tuyaaryma Kuo. The images of the characters are made in relief against the background of views of the Lena Pillars Nature Park and modern architectural objects of Yakutsk. At the top, there are images of the coat of arms of the Republic of Sakha (Yakutia) and silhouettes of flying Siberian cranes. There are inscriptions ‘РЕСПУБЛИКА САХА (ЯКУТИЯ)’ (REPUBLIC OF SAKHA (YAKUTIA) along the upper rim and ‘100 ЛЕТ’ (100 YEARS) at the bottom against the background of the ethnic ornament.

The Republic of Sakha (Yakutia), a constituent territory of the Russia, is a unique region in the world because of its nature and territory.

The year 1632, when Cossack head Pyotr Beketov founded the stockaded town Lensky Ostrog on the right bank of the Lena River, is commonly believed to be the date of the accession of Yakutia to Russia. The Yakut Autonomous Soviet Socialist Republic was established on 27 April 1922 pursuant to the resolution of the Presidium of the Russian Central Executive Committee.

Yakutia is located in the north-eastern part of Eurasia and is the largest region of the Russian Federation. Over 40% of the territory of the Republic is located beyond the Polar Circle. Yakutia is the coldest of the inhabited regions on the planet. Almost the entire continental part of Yakutia is a permafrost zone. The climate and environmental conditions of Yakutia are characterised as extreme in many ways.

For a long time, the residents of this territory lived isolated from other ethnic groups and thus have preserved their traditional lifestyle (fishing and hunting, cattle and reindeer breeding), including original culture, and religion.

Industrial production is the key sector for Yakutia’s economy, and its growth is primarily associated with the development of the richest natural resources. Diamond mining plays the most important role in the mining sector of the Republic. The Yakutian diamond-bearing province is the largest one in Russia and accounts for 90% of the reserves and 95% of mining output.

Yakutia is one of the rare regions on the planet that has preserved the pristine nature and the remarkable diversity of the flora and fauna. The Republic is home to over 30% of Russia’s wildlife and more than 10% of the world’s wildlife.

The national epic Olonkho and the Lena Pillars Nature Park are on the UNESCO List of World Heritage. The ancient epic tales Olonkho are one of the main treasures of Sakha. This epic contains multiple poems passed from generation to generation. The Lena Pillars Nature Park stretching 40 kilometres along the right bank of the Lena River is often called the stone forest. Scientists discovered rock paintings and ancient working tools there, as well as the remains of a mammoth, a steppe bison and a rhinoceros.