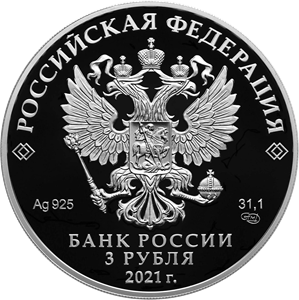 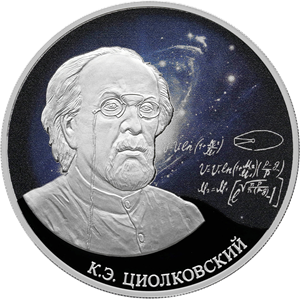 the mirror field of the disc bears a relief portrait of Konstantin Tsiolkovsky against the background of colour images of the space and formulae; at the bottom, along the rim, there is an inscription: ‘К.Э. ЦИОЛКОВСКИЙ’ (KONSTANTIN TSIOLKOVSKY).

Konstantin Tsiolkovsky (1857–1935) is a self-taught scientist and one of the founding fathers of modern astronautics. Neither poverty, nor hearing problems, nor isolation from the domestic scientific community could hinder his desire for the stars.

Being a weirdo and a dreamer, Tsiolkovsky devoted all his efforts to science. He sent his first research papers, Theory of Gases, The Mechanics of the Animal Organism, and The Duration of the Radiation of the Sun, to Saint Petersburg. The most prominent scientists of that time (primarily Ivan Sechenov and Alexander Stoletov) treated the self-taught youth kindly. He was even invited to join the Russian Physico-Chemical Society. Tsiolkovsky did not reply: he did not have money to pay membership fees.

Tsiolkovsky’s main project at that time was airships (the scientist decided to avoid the use of explosive hydrogen by replacing it with hot air, and the tightening system he developed allowed the ‘ship’ to maintain constant lift at various flight heights). However, Tsiolkovsky’s interest in flying above the ground faded when he became interested in stars.

In 1903, Tsiolkovsky switched to work related to space exploration. In his article Exploration of Outer Space by Means of Rocket Devices he substantiated for the first time ever that a rocket could become a vehicle for successful space flights. The scientist also developed the concept of a liquid-propellant rocket engine. In particular, he determined the speed required for the vehicle to enter the Solar System (the second cosmic velocity). Tsiolkovsky dealt with many practical issues of space that later formed the basis for Soviet rocket engineering: he proposed options for rocket control, cooling systems, the design of the nozzle and the fuel supply system.