The 625th Anniversary of the Battle on Kulikovo Field 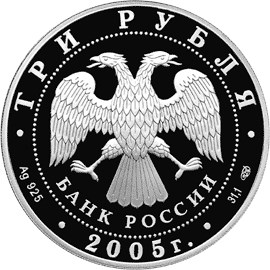 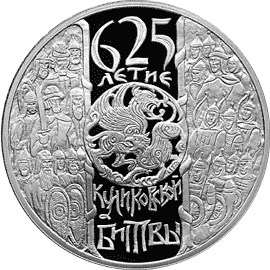 in the centre – the Emblem of the Bank of Russia [the two-headed eagle with wings down, lower – the semicircular inscription – «БАНК РОССИИ» (BANK OF RUSSIA)] framed by a circle of dots and inscriptions along the rim: at the top – «ТРИ РУБЛЯ» (THREE RUBLES), at the bottom – the year of issue «2005», the letters to the left indicate the metal sign and the fineness, to the right – the fine metal content and the mint trade mark.

in the circle of the central part, on a vertical stripe of the glassy surface – a stylized image of a winged lion and a griffin, in the upper and lower part of the strip – the inscription in four lines: «625 ЛЕТИЕ КУЛИКОВСКОЙ БИТВЫ» (THE 625TH ANNIVERSARY OF THE BATTLE ON KULIKOVO FIELD). To the left and to the right from the glassy strip, on the matted surface – the images of Russian forces and ofthe Golden Horde ones.