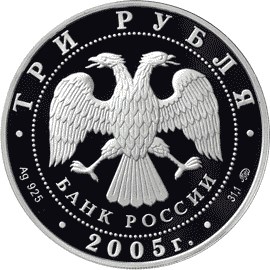 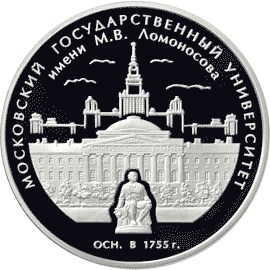 in the centre – the Emblem of the Bank of Russia [the two-headed eagle with wings down, lower – the semicircular inscription – "БАНК РОССИИ" (BANK OF RUSSIA)] framed by a circle of dots and inscriptions along the rim: at the top – "ТРИ РУБЛЯ" (THREE RUBLES), at the bottom – the year of issue "2005", the letters to the left indicate the metal sign and the fineness, to the right – the fine metal content and the mint trade mark.

the building of the University on Mokhovaya street,before it – the monument to M.V. Lomonosov, in the background – outlines of the Main Building of the Moscow University on the Vorobiyovy Hills. The inscription along the rim in two lines: "МОСКОВСКИЙ ГОСУДАРСТВЕННЫЙ УНИВЕРСИТЕТ ИМЕНИ М.В.ЛОМОНОСОВА" (M.V. LOMONOSOV MOSCOW STATE UNIVERSITY), at the bottom – the date: "ОСН. в 1755 г." (FOUNDED in 1755).

The M.V. Lomonosov Moscow State University established in 1755 due to theefforts of M.V. Lomonosov, the outstanding scientist and encyclopedist, the first Russian academician, is a major higher educational institution and one of thecentres of world science. The University has been bearing the name of M.V.Lomonosov since 1940.During two centenaries the University was disposed in the middle of Moscow inthe house specially built for it in 1786-1793 (architect M.F. Kazakov) and reconstructed in 1817-1819 (architect D.I.Gilardi). The Main Building of theUniversity was constructed in 1949-1953 on the Vorobiyovy Hills (architects L.V. Rudnev, S.E.Chernyshev, P.V.Abrosimov, A.F. Khriakov). The Moscow University includes 15 scientific research institutes, over 350 chairs, 12 educational and scientific stations, 49 museums, the Botanical garden, the scientific library with 9 million library stock, the publishing house. More than 11 thousand lecturers and scientific research workers are employedin the University. Over 40 thousand students are studying here in 27 faculties.In June 1992 the Moscow University acquired the status of a self-governed statehigher educational institution.