The Cathedral of Intercession on the Moat 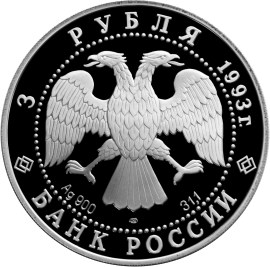 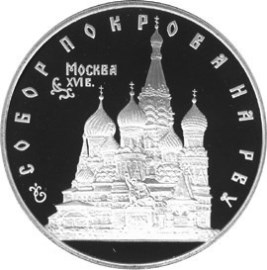 in the center — the Emblem of the Bank of Russia (the two headed eagle designed by I.Bilibin), the letters under it indicate the metal sign, the fineness, the mint trademark and the fine metal content.. The inscriptions along the rim framed by a circle of dots: at the top — «3 РУБЛЯ 1993 г.» (3 RUBLES 1993), at the bottom — "БАНК РОССИИ" (BANK OF RUSSIA).

the Cathedral of Interession on the Moat in the Red Square in Moscow with the monument to Minin and Pozharsky in the foreground, the inscription to the left in two lines - "МОСКВА XVI в." (MOSCOW XVIth centure). The inscription along the rim - "СОБОР ПОКРОВА НА РВУ" (THE CATHEDRAL OF THE INTERCESSION ON THE MOAT).

The Cathedral of Interession on the Moat was built in 1555-1561 by Russian architects Barma and Postnik to commemorate Ivan the Terrible's victory over the Khanate of Kazan. Later a tenth church was added to the nine churches of the Cathedral. Built on the same foundation, it was named after Basil the Blessed who was buried nearby (hence the second name of the cathedral, the St. Basil's). The monument to Prince Dmitri Pozharsky (1578-1642) and boyar nobleman Kuzma Minin (died in 1916) was the first public monument built in Russia to honour civilians who led the people's volunteer corps against the Polish and Lithuanian invaders in 1612. The monument was built in 1818 by Ivan Martos with public donations.