The 250th Anniversary of the Birth of G.P. Derzhavin 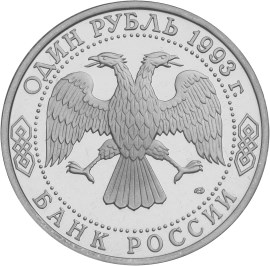 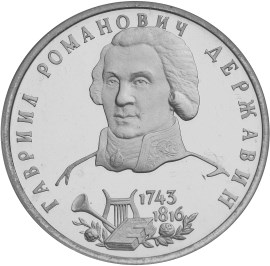 in the center — the Emblem of the Bank of Russia (the two-headed eagle designed by I.Bilibin), under it to the right - the mint trademark. The inscriptions along the rim framed by a circle of dots: at the top — «ОДИН РУБЛЬ 1993 г.» (ONE RUBLE 1993), at the bottom — «БАНК РОССИИ» (BANK OF RUSSIA).

a portrait of G.P. Derzhavin in a Senator's uniform, under it - a lyre, a trumpet and a book, the symbols of poetry and education, against the background of laurel branches. The inscription along the rim - "ГАВРИИЛ РОМАНОВИЧ ДЕРЖАВИН" (GAVRIIL ROMANOVICH DERZHAVIN), to the right - the dates in lines "1743" and "1816".

Gavriil Romanovich Derzhavin (1743-1816) - a Russian poet, Governor, Senator and Minister of Justice under Catherine the Great. In his best works he lampooned corrupt lords and immoral courtiers.