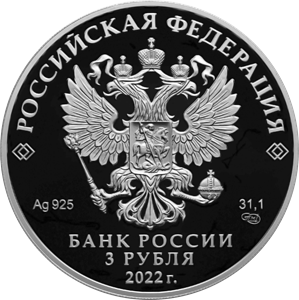 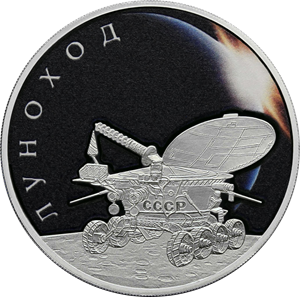 a relief image of the robotic lunar rover Lunokhod?1 on the lunar surface against the background of coloured images of the Earth and the Sun; and the relief inscription on the left around the circumference ‘ЛУНОХОД’ (LUNOKHOD).

On 10 November 1970, the unmanned spacecraft Luna-17 was launched from the Baikonur Cosmodrome using the launch vehicle Proton-K. It delivered the world’s first robotic lunar rover Lunokhod-1 to the Moon. The first three stages and the upper stage of the rocket fired to place the spacecraft into a trajectory towards the Moon. Luna-17 was launched to the Moon from an Earth parking orbit.

The spacecraft Luna-17 was designed to deliver the robotic lunar rover Lunokhod 1 onto the lunar surface and conduct research on the Moon. It was totally controlled from the Earth and was built at Lavochkin Design Bureau No. 301 (currently – Lavochkin Science and Production Association controlled by the State Space Corporation Roscosmos).

After examining the landing place and deploying the ramps, the spacecraft received a relevant command and at 09.28 (Moscow time) Lunokhod-1 moved down the ramp from the landing platform to the lunar surface. This opened a new era in the exploration of the natural satellite of the Earth by unmanned spacecraft.

In the course of the work programme, in 116 motion sessions, Lunokhod-1 travelled a distance of 10,540 metres on the lunar surface, examining in detail an area of 80,000 m2. The maximum travel speed was 2 km/h. Over this time, the lunar rover downlinked to the Earth 200 telephotometric panoramas and about 20,000 slow-scan images. The shooting provided stereoscopic images of the most interesting features of the relief enabling a detailed exploration of its structure.