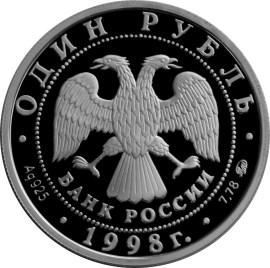 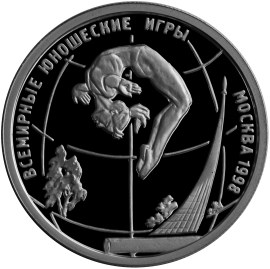 in the center — the Emblem of the Bank of Russia (the two-headed eagle designed by I.Bilibin, lower — the semicircular inscription — «БАНК РОССИИ» (BANK OF RUSSIA) framed by a circle of dots and inscriptions along the rim: at the top — «ОДИН РУБЛЬ» (ONE RUBLE), at the bottom — «1998», the letters to the left indicate the metal sign and the fineness, to the right — the fine metal content and the mint trade mark.

a girl gymnast during the jumping against the background of the outline picture of the globe, at the bottom — a balance beam, behind to the right — the obelisk to the Space Explorers in Moscow, to the left — a tree. The inscriptions along the rim: to the left — «ВСЕМИРНЫЕ ЮНОШЕСКИЕ ИГРЫ» (WORLD YOUTH GAMES), to the right — «МОСКВА 1998» (MOSCOW 1998).

The First World Youth Games (Moscow, July 11th -19th, 1998) were sporting competitions between young sportsmen from more than 140 countries of the world. The program of the Games included sporting types especially popular among young people: the football, track and field athletics, swimming, basketball, volley-ball, tennis, gymnastics and modern rhythmic gymnastics, synchronized swimming, fencing, judo, Graeco-Roman wrestling. The Games were held under the patronage of the International Olympic Committee (IOC). The motto of the Games: «Moscow — Open World of the Childhood». There were no such sporting competitions in the history of the contemporary Olympic movement. The main aim of the Games is to involve young sportsmen in the Olympic movement, to prepare them for complicated psychological conditions of international starts, to select young talents for the participation in the future Olympic Games. Beginning from 2004 the World Youth Games will be held constantly, one year before the Olympic Games.